#Fantrax is a platform that spans a wide range of fantasy sports across many different sports. Fantasy Golf? Yeah, they have that. This post will obviously focus on the football (NFL) elements.

Fantrax boasts they are the most customizable fantasy platform around, and while it's hard to quantify that claim, it is safe to say they do support a very wide range of features and playing styles. Unlike other platforms, establishing a new league begins with a decision of whether you want to start with their base template, apply a template based on another site's platform (if you are moving your league), or copying an existing league. 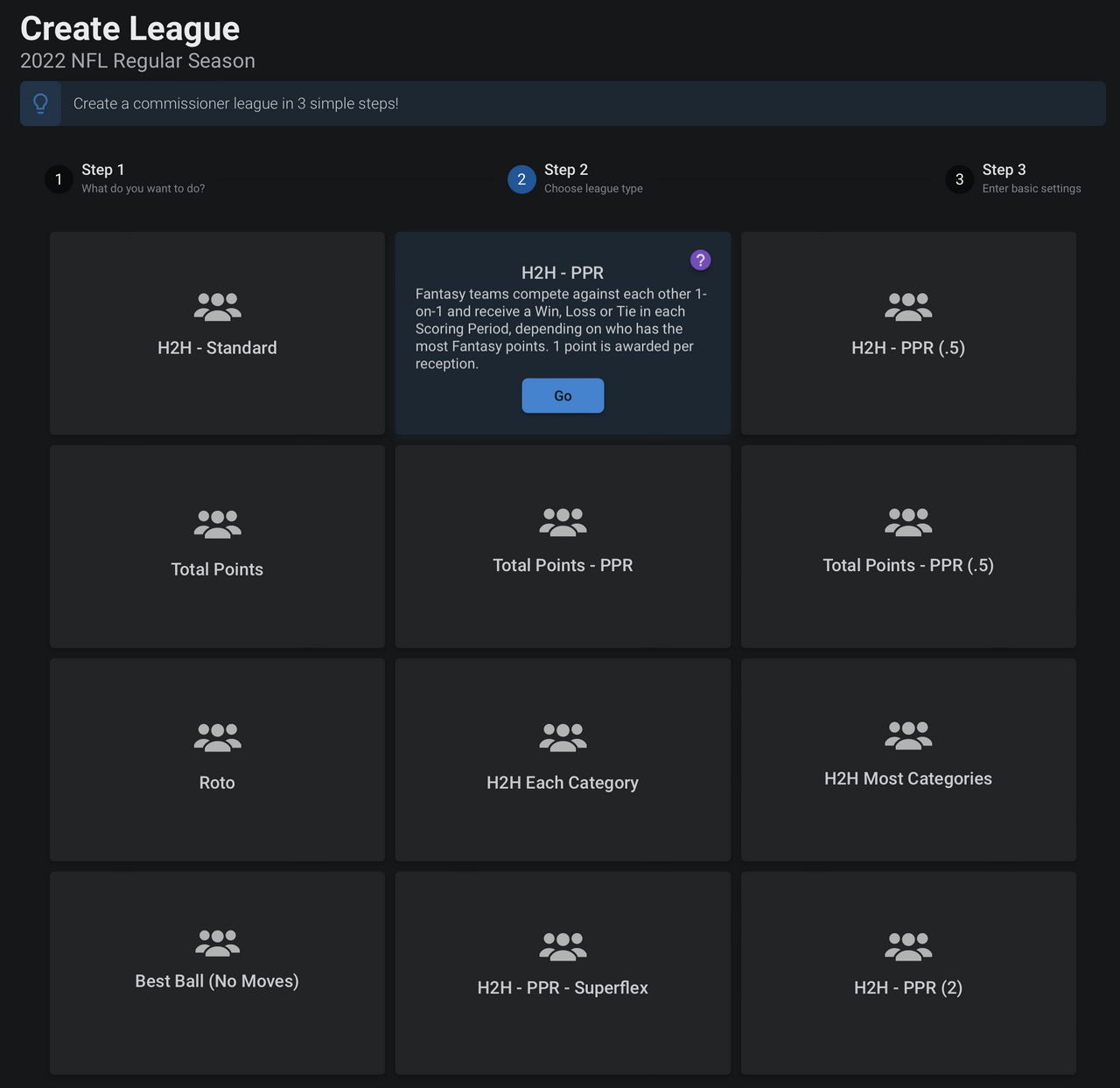 Assuming you start with their default template, you now get to choose which template to start with. Fantrax offers the most common competition styles:

You then combine those styles with common scoring categories: PPR, half-PPR, standard, and superflex. Superflex is an odd one to include in this choice, as it's more of a roster style than a scoring approach, but it's there all the same. 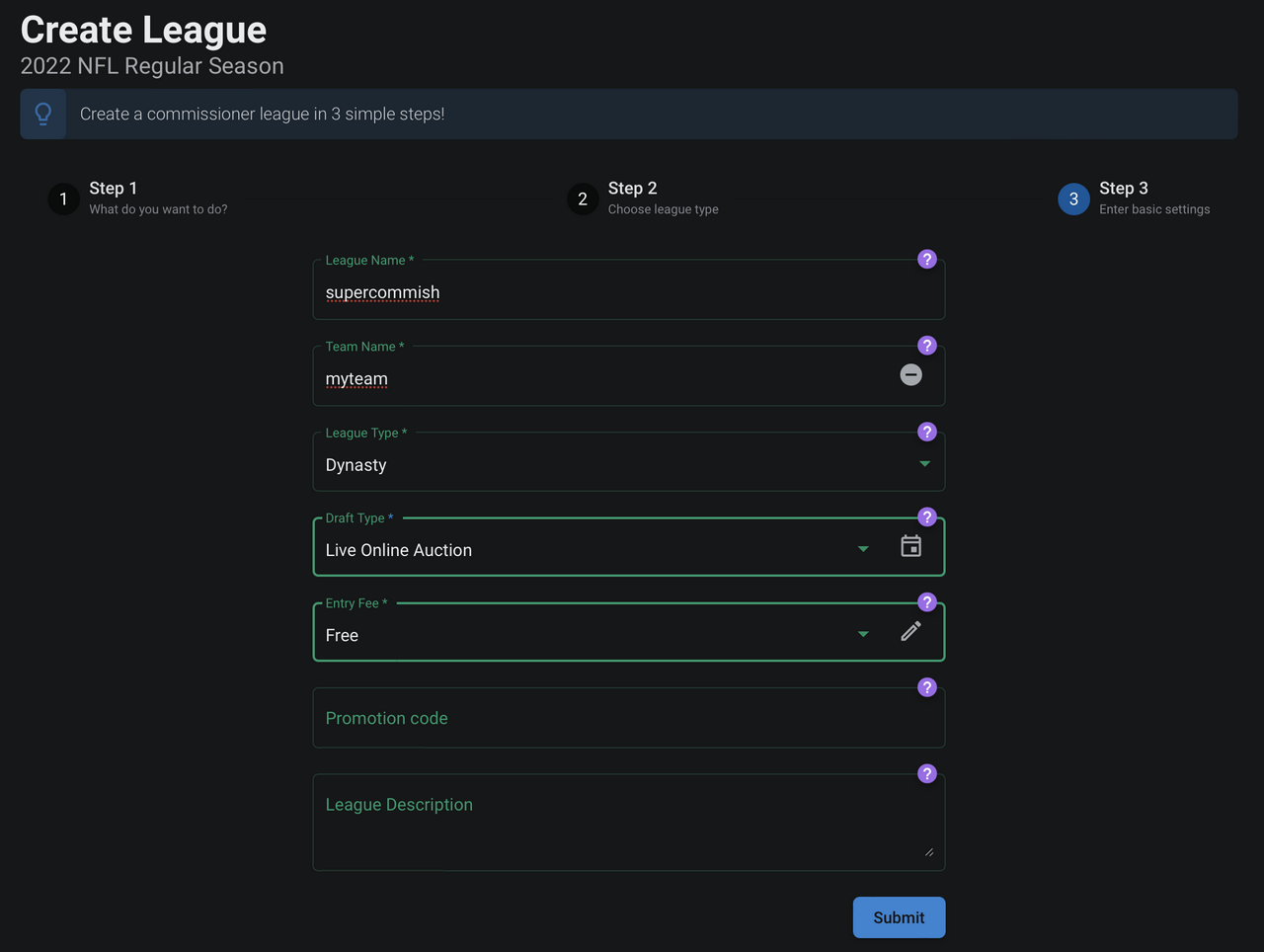 From there you input your basic information: league name, league description, the commissioner's team name, etc., but it's also here where you define your league type and auction type as well as you entry fee. The latter is important for a decision I'll talk about later, but Fantrax supports all of the basics that you would expect:

And a wide variety of draft styles:

Right out of the gate you see where Fantrax starts to make it's boast about a high degree of customization, as offline drafts, slow drafts, and Player Picker drafts are not draft styles offered by a lot of platforms.

From there you are taken to Fantrax's main league settings screen, where categories are listed across the top and each category has a myriad of settings you can configure. I will save uber details of all these pages for future posts, but let's skim through each one quickly. 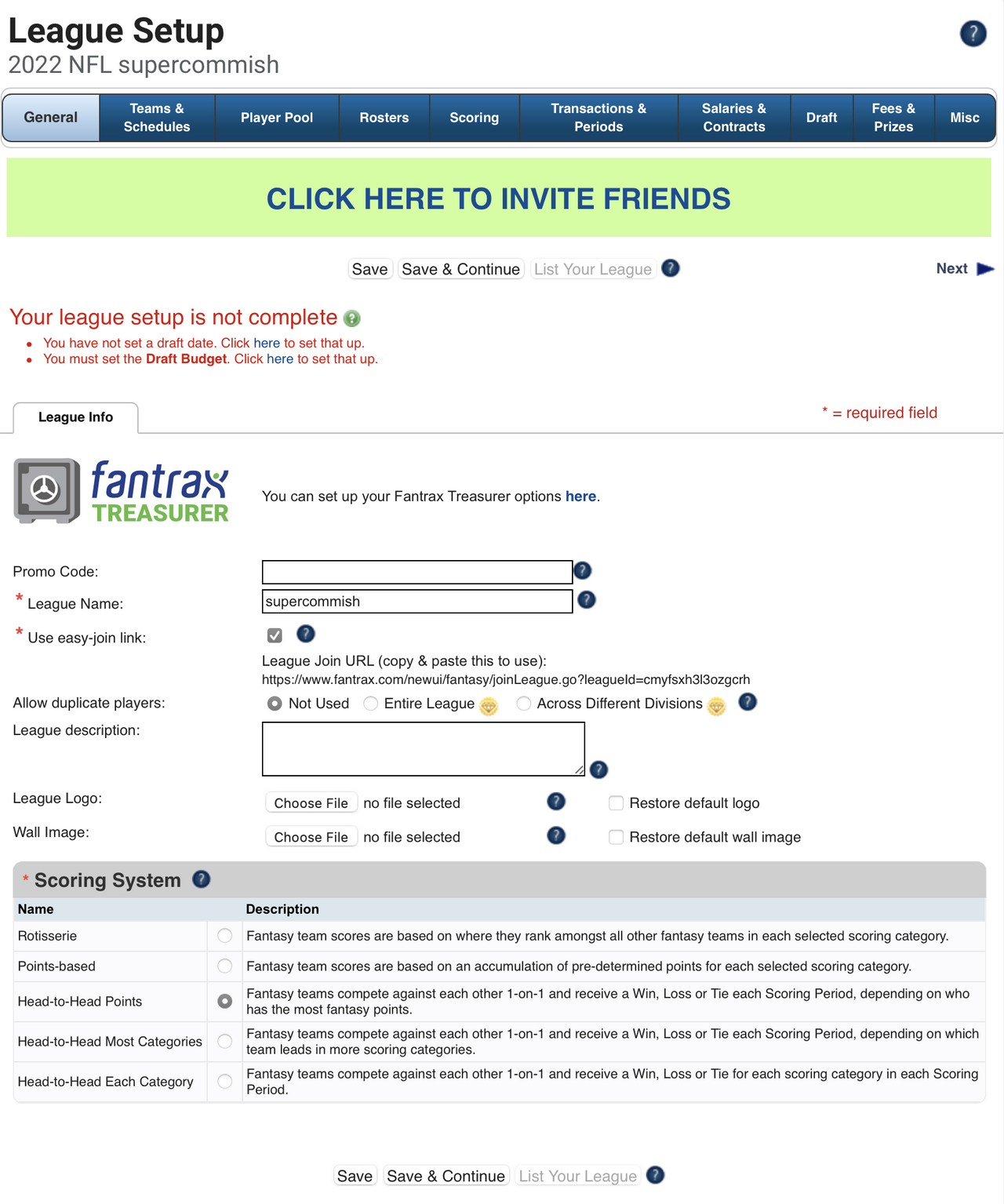 Now is a good point to talk about Fantrax Treasurer, which offers the ability to collect your league dues right in the platform. This is a unique offering amongst platforms, as most offer nothing or at best a link/integration to another dues service. So having the ability to use a dues collection service right in your main league platform is very attractive. This is one way that Fantrax makes money.

The other way Fantrax makes money is to offer premium league features in a pay model. In this walkthrough, I am not going to detail which features are paid and which are not, but you can see that list here. If you have a promotional code to enable paid features, you can enter that here. 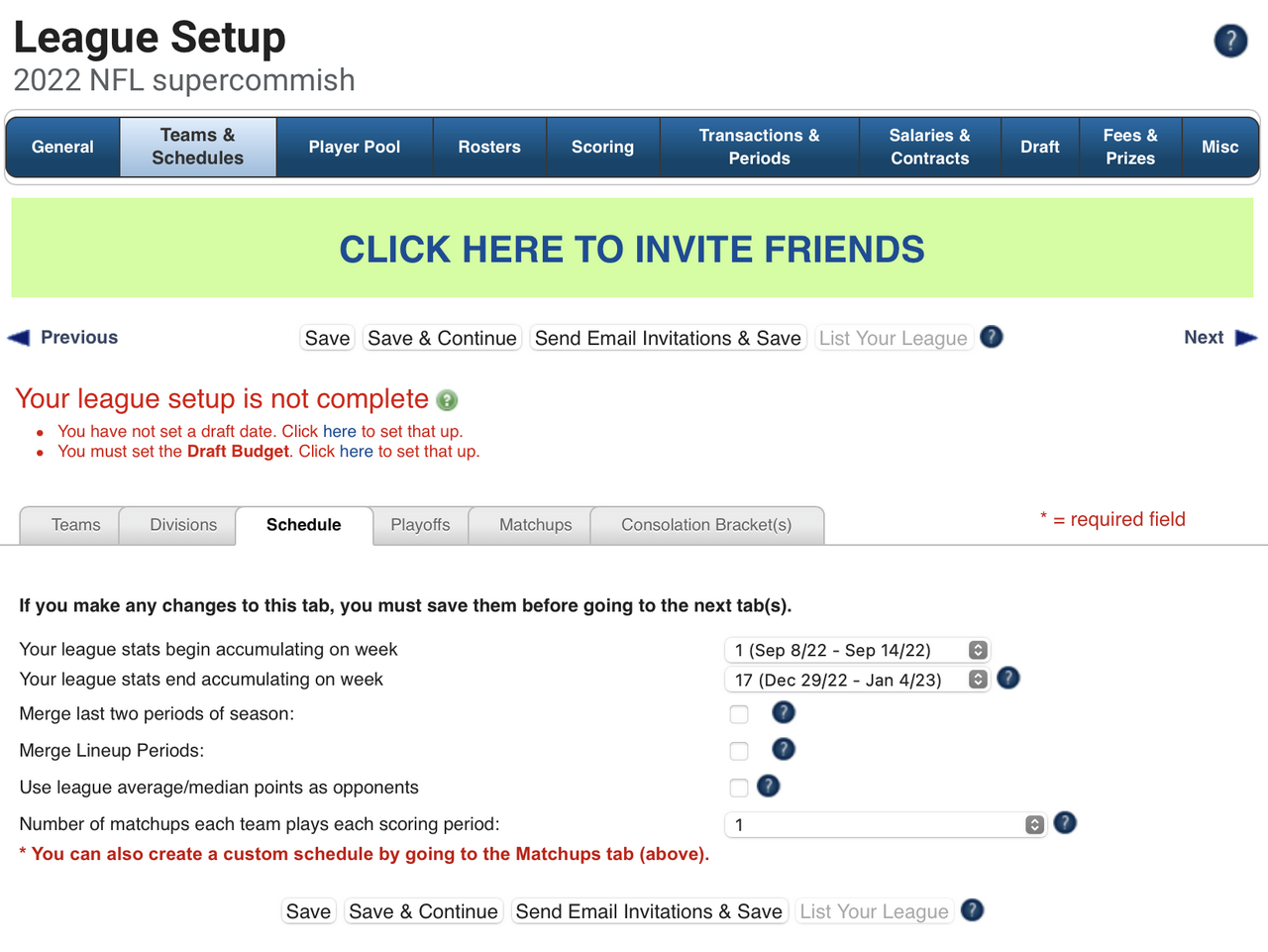 On the Teams & Schedules page, there are a lot of subpages that allow you to configure things related to both of these items. The subpages are:

While all of these subpages have a number of options on them, this page overall is fairly straightforward and unless you want to get crazy with your schedule, you want spend too much time here, unlike the other pages. 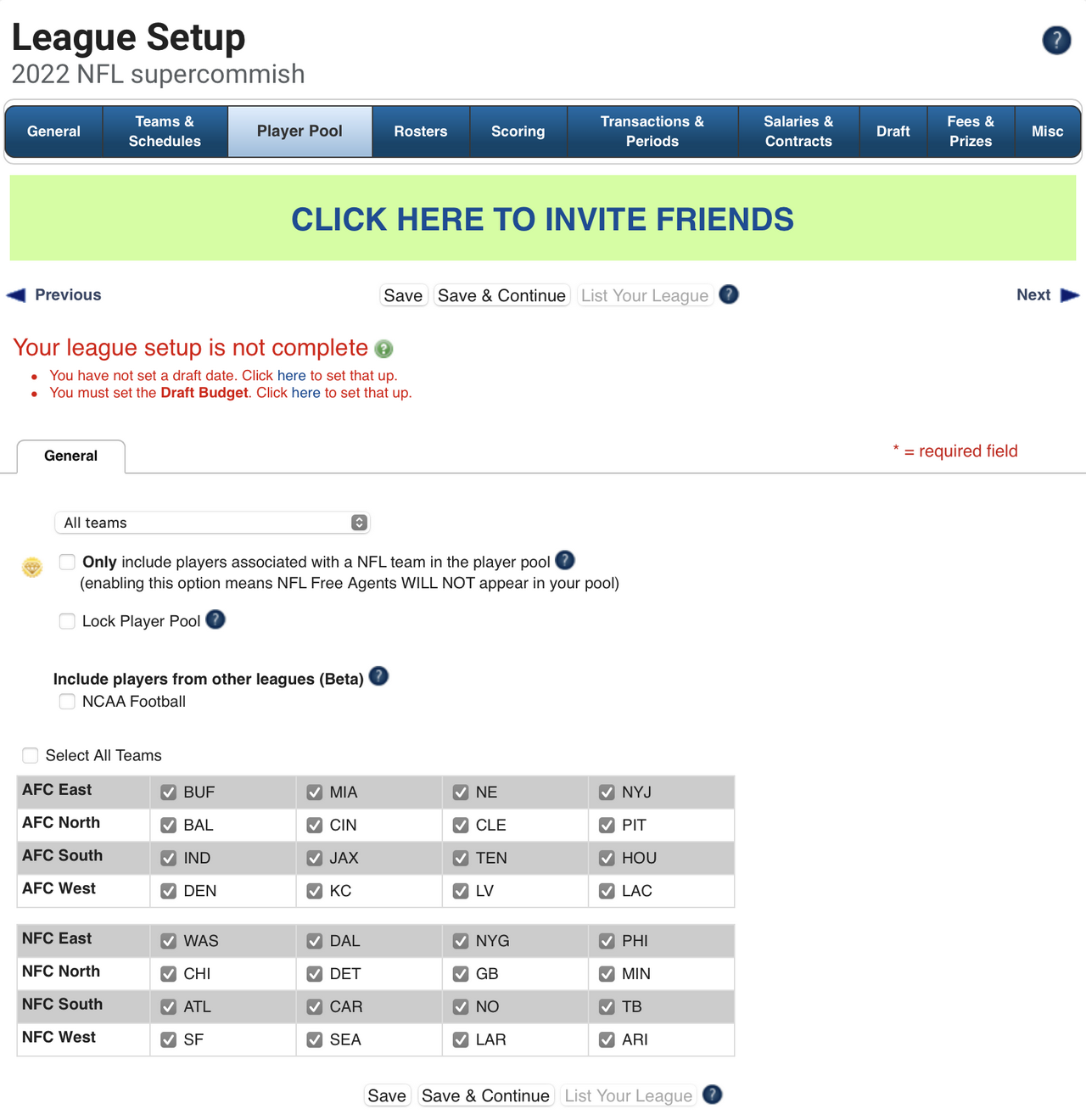 The Player Pool page is another page where you won't spend much time, but I'm calling it out here as one of those areas that makes Fantrax highly customizable compared to other platforms. There aren't many platforms out there that allow you to configure which NFL teams contribute to your league's player pool. Admittedly, I've never heard of anyone creating a fantasy football league comprised of players from the NFC North, for example, but you could. 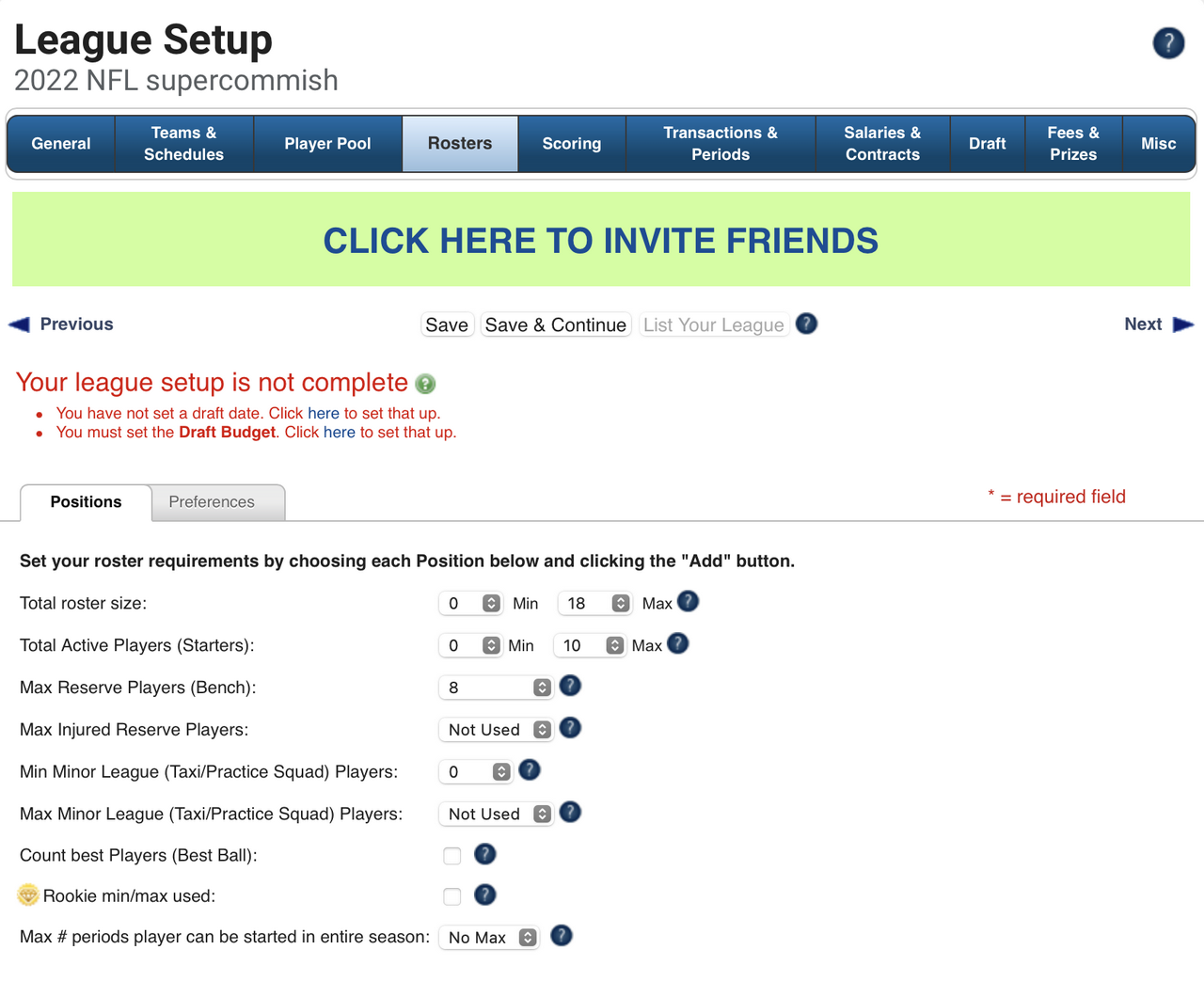 Here is where Fantrax begins to shine. The roster configuration possibilities are endless, allowing you to create a variety of types of fantasy games. In addition to the usual positions and many types of FLEX configurations, there are a myriad of IDP (individual defense player) options that go beyond defensive end, tackle, linebacker, cornerback and safety. You want Punters? They have Punters. You want Fullbacks? They have Fullbacks. You can even create a roster based on picking entire Team Offenses, Team Defenses, Special Teams, or even the entire team itself.

Fantrax also offers your typical Dynasty IR, and taxi/practice squad features, along with configurations to force players into mins/maxes, restricting how often a player can start, restricting how many rookies, and more.

If Rosters are where Fantrax begins to shine, here is where they thrive from a customization ability. The number of stat categories you can pick for scoring is extensive, though the interface for building your scoring settings is a bit clunky. There are hundreds of stat categories, but they're buried in overly large dropdown boxes, which makes it difficult for me to show anything here. It also makes it difficult to build your scoring settings for you league, so as a Commissioner, plan to spend quite a bit of time in this section. It will help if you analyze the categories ahead of time, design your scoring settings in a spreadsheet or document, then go in and configure your league. 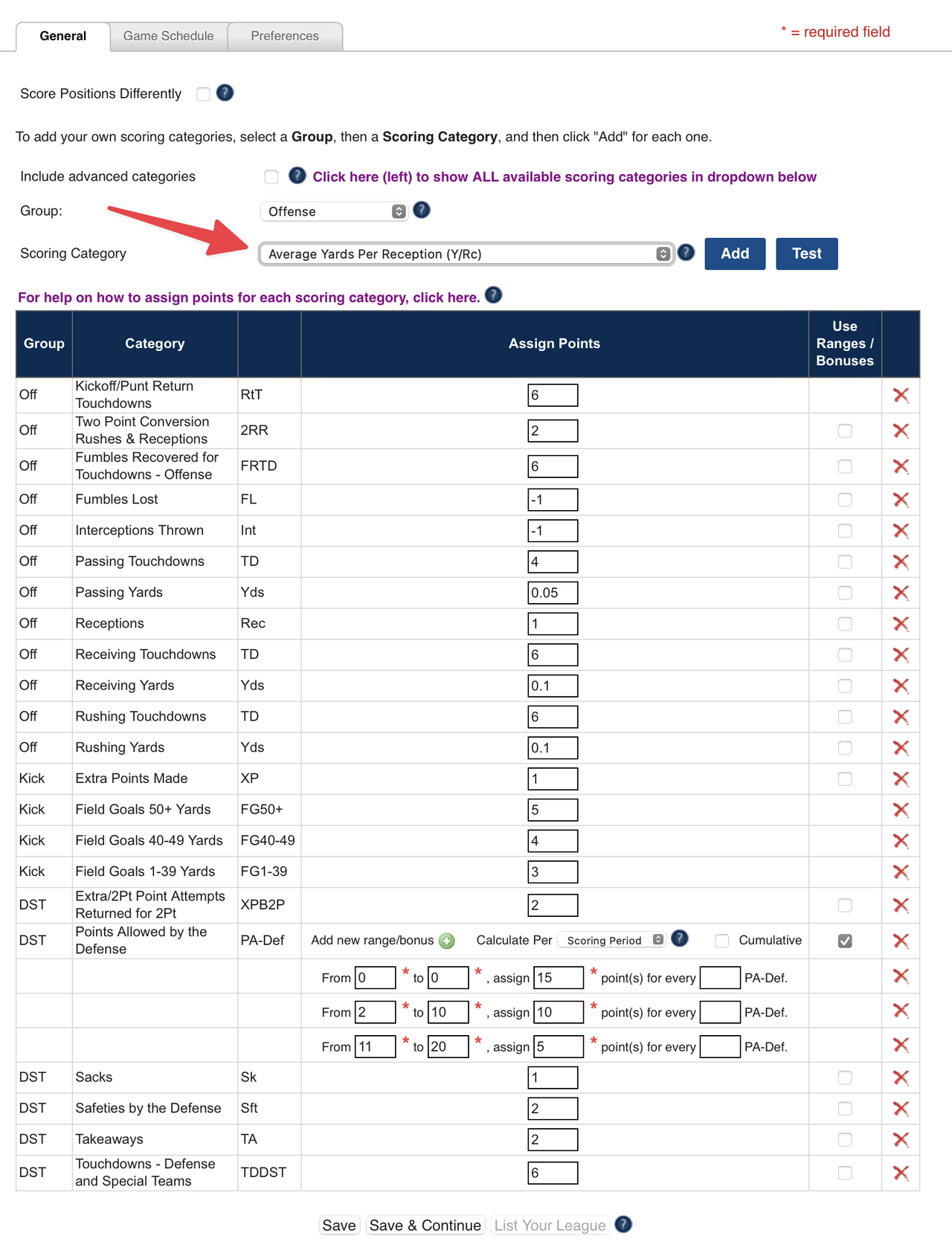 In addition to the sheer number of stat categories, Fantrax also offers scoring positions differently (useful for TE Premium leagues, but Fantrax allows you to go further than that). You can also choose to omit certain NFL games from counting toward scoring, as well as control how long stat corrections can be applied to your league. Those latter two aren't going to be used often, but it's nice the features are there if you need them. 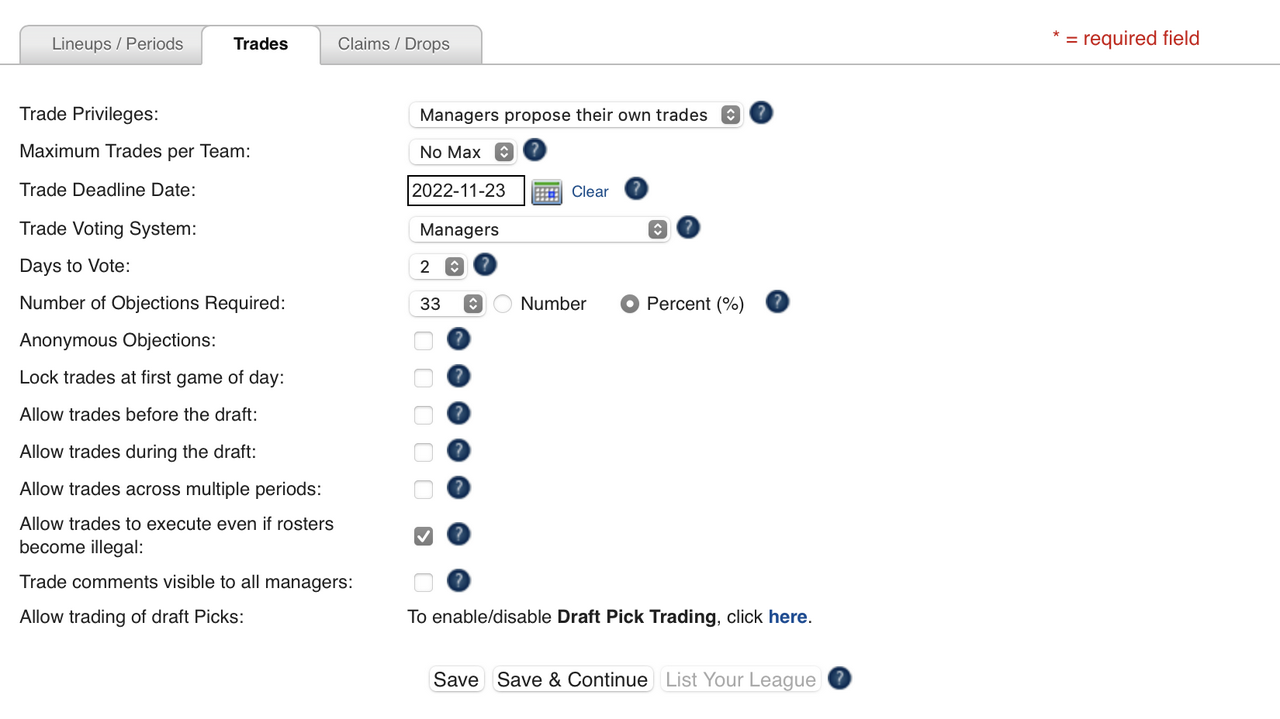 This section focuses when starting lineups lock, who can edit them, how trades process, and how add/drops process, and are split across 3 submenus. 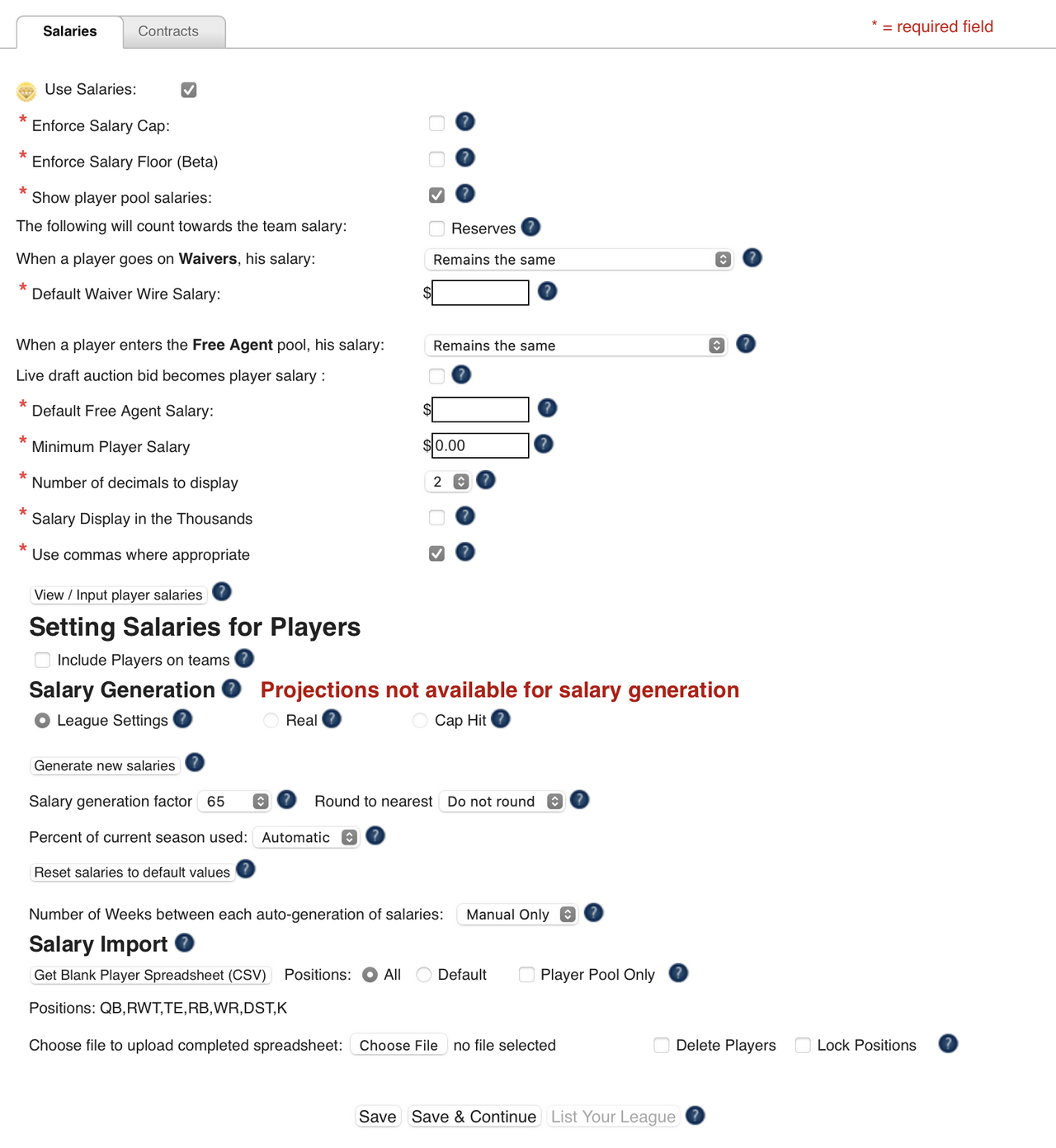 Fantrax offers supports for player salaries, a salary cap, and multi-year contracts. I plan to cover this topic in-depth in future posts across multiple platforms, but in a nutshell:

More on this topic across a variety of platforms in future posts. 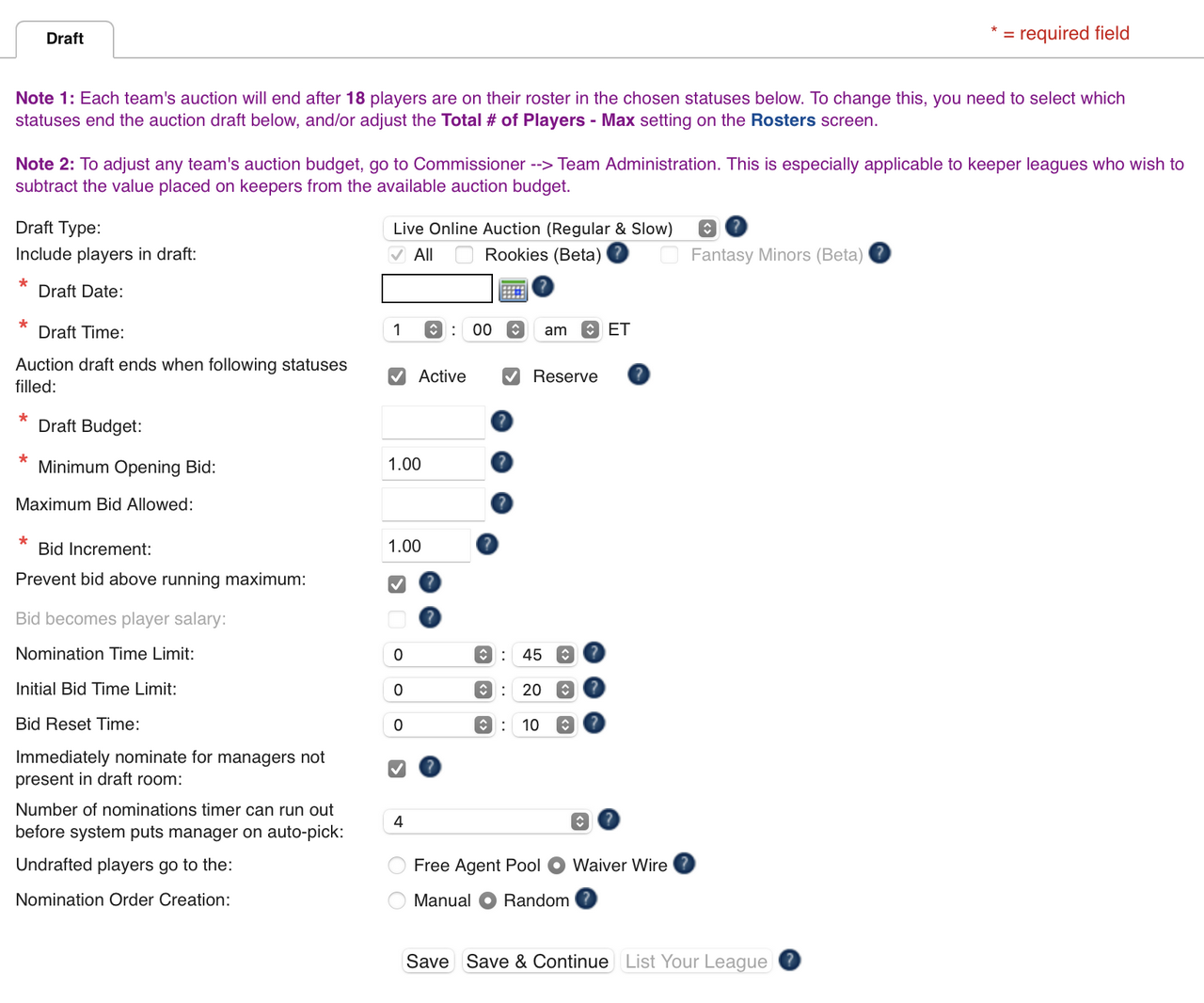 On this page you will configure your draft, and most settings are dependent on which draft type you choose (the auction fields are shown above). There isn't much beyond your typical day, time, rounds, order, time per pick limit, but a few extras include how the draft behaves for absent managers (or those not paying attention), where undrafted players go, and if managers can overdraft.

For auction drafts, there are many more options, including timers for bidding, draft budget, opening bid, max bid, how auction budget relates to salaries (if used), and more.

There isn't much on this page, and you will only use it if you opt to use Fantrax Treasurer to hold your payments. I will cover this in more detail in a later post. 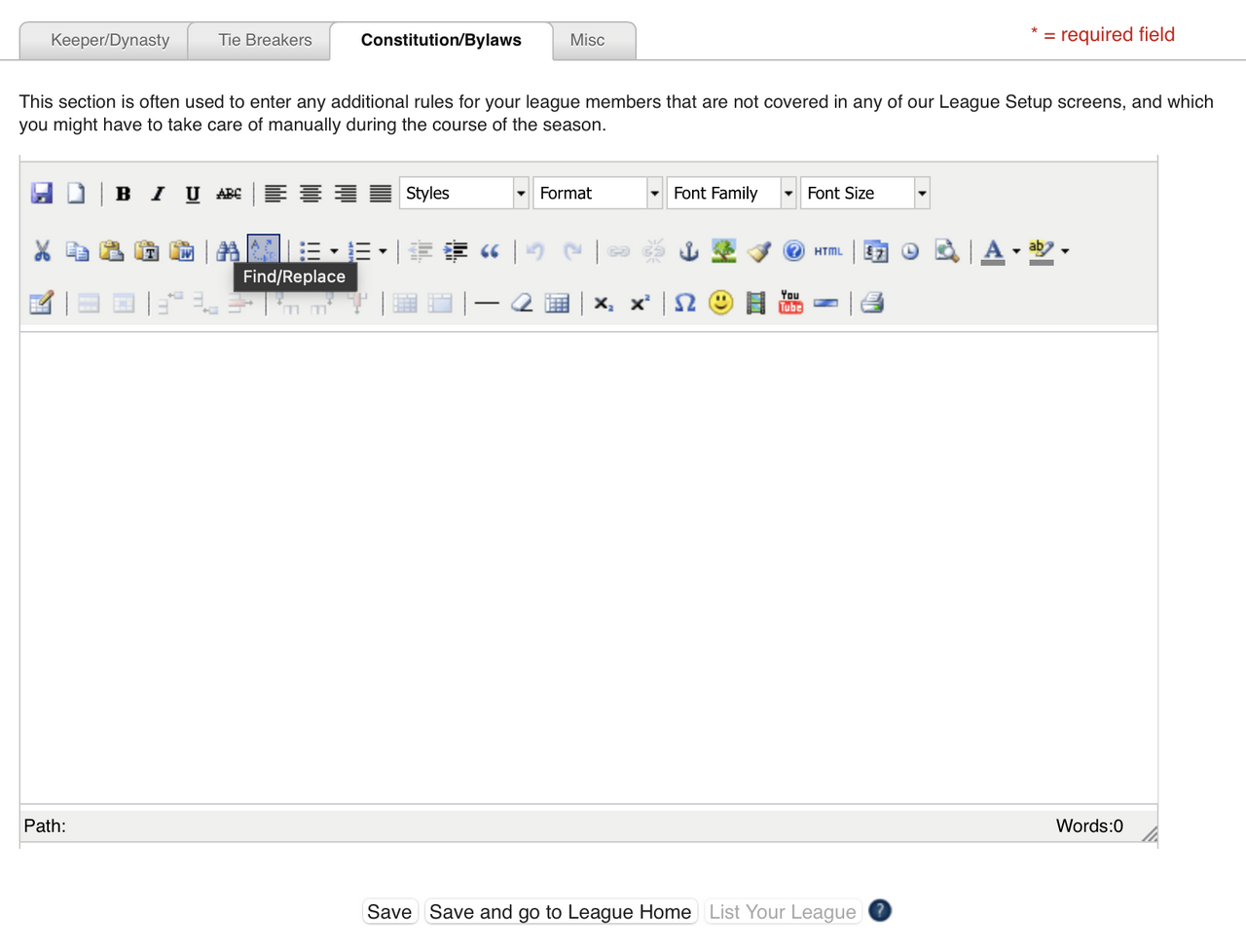 The Misc page has a few subpages that let you configure a few non-related things. 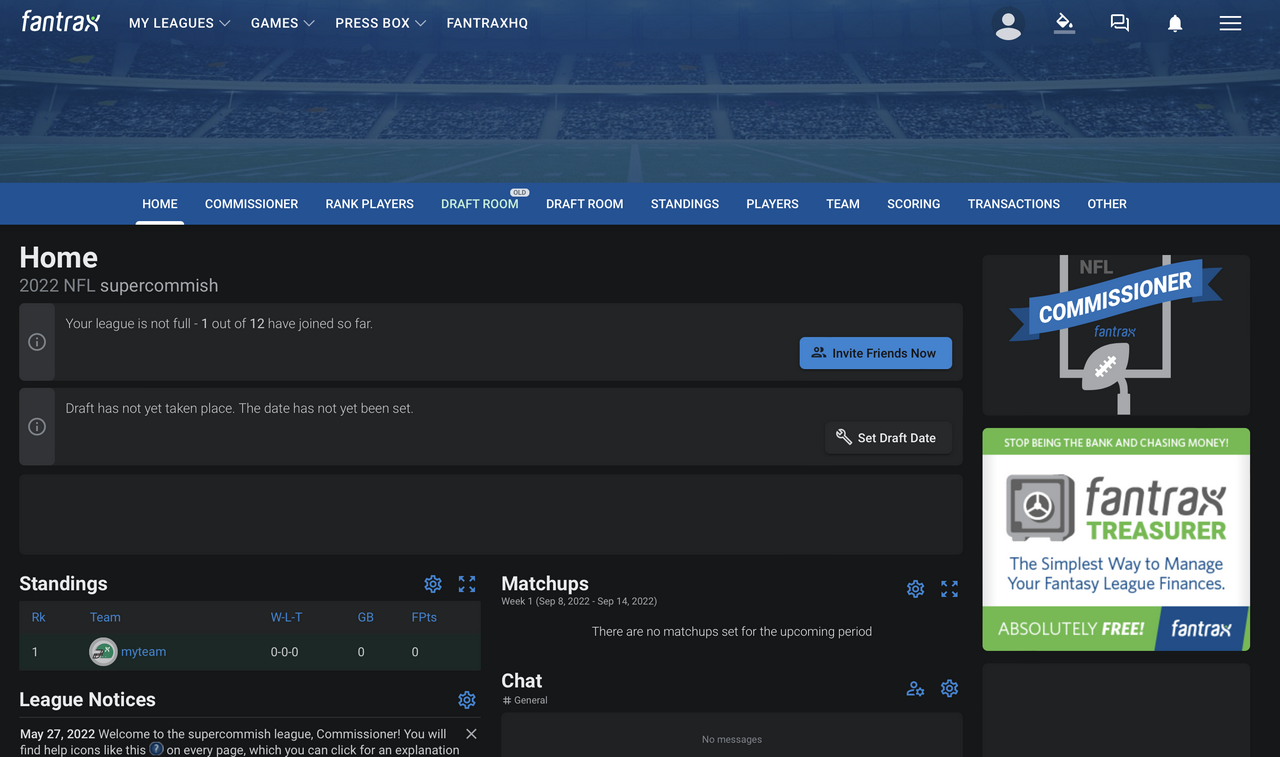 After all of that setup work, Fantrax takes you back to your league home page where you can start using Fantrax as a team manager. You can always access the league settings again by choosing options from the Commissioner menu.

Fantrax and its many options can be a bit overwhelming for casual commissioners, but there no denying that it lives up to its boast of being highly customizable. There are other highly customizable platforms out there, though, and I'll take a look at those in future posts.